He made his way to the top of ‘Big Law.’ Then his drinking almost brought him down

Detoxing from opioids cold turkey is hell. This is how it feels

Teenagers Say Depression and Anxiety Are Major Issues Among Their Peers

Most American teenagers — across demographic groups — see depression and anxiety as major problems among their peers, a new survey by the Pew Research Center found.

The survey found that 70 percent of teenagers saw mental health as a big issue. Fewer teenagers cited bullying, drug addiction or gangs as major problems; those from low-income households were more likely to do so.

The consistency of the responses about mental health issues across gender, race and income lines was striking, said Juliana Horowitz, an associate director of research at the center.

The survey of 920 teenagers ages 13 to 17 in the United States was conducted online and by phone in the fall. In their report, the researchers broke down results by income level and gender but not race or ethnicity, citing the small sample size. 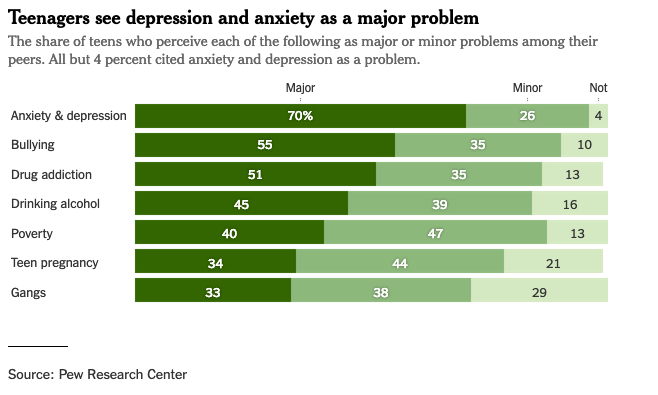 Some psychologists have tied a growth in mental health issues among teenagers to increased social media use, academic pressure and frightening events like terror attacks and school shootings.

Teenagers who grew up in the post-9/11 era, and amid many school shootings, may have anxiety tied to an environment filled with dire warnings about safety, said Philip Kendall, director of the Child and Adolescent Anxiety Disorders Clinic at Temple University in Philadelphia.

His center often helps children distinguish between the possible and the probable, to help put anxiety about frightening but rare events in proper context.

Another major stressor is constant surveillance by peers on social media, and the “fear of missing out” it can generate, he added. Again, he said, guidance about how to understand social media — for example, a person taking 50 photos to get one perfect image — can help to dispel anxiety.

But it is still cause for concern, she said. Teenagers are dealing with rapid changes to their bodies, hormones and lives in an era of nonstop information overload, and they need help developing coping strategies.

“It becomes really important for the adults around teens to be stable influences in their lives, to give them space for them to talk,” she said.

A study released in 2017 found that the number of children and adolescents admitted to children’s hospitals for thoughts of self-harm or suicide had more than doubled from 2008 to 2015, echoing trends in federal data.

Dr. Bufka said her top advice for adults worried about teenagers in their lives was simple: Listen, without “pouring on advice” or judging too much, and give them the opportunity to talk to a counselor or psychologist if needed.

“Let them know that you’ve got their back,” she said.

[If you are having thoughts of suicide, call the National Suicide Prevention Lifeline at 1-800-273-8255 (TALK) or go to SpeakingOfSuicide.com/resources for a list of additional resources.]