Teenagers Say Depression and Anxiety Are Major Issues Among Their Peers

He made his way to the top of ‘Big Law.’ Then his drinking almost brought him down

On a Sunday morning in 2010, Steven Wall was given an ultimatum by his wife and his boss: Get help for your drinking or you’ll lose your marriage, your two young daughters and your job.

Wall, the managing partner of internationally renowned law firm Morgan Lewis, had just returned from an epic bender during a business trip.

He’d tried to quit drinking several times before. But the conversation that Sunday proved to be the major turning point in his life. “Hearing what they had to say was like being hit on the head with two-by-fours,” Wall said.

Being told he could lose everything he loved, he agreed to seek treatment.
Wall’s drinking problem, while severe, stemmed partly from how he tried to manage the many pressures of his job. In that he is hardly unique.

A landmark study of more than 10,000 attorneys conducted by the American Bar Association and the Hazelden Betty Ford Foundation in 2016 showed that 36% of practicing attorneys screened positive for problem drinking, defined as “hazardous, harmful and potentially alcohol-dependent.” That’s far higher than what highly educated workers overall (12%) and medical doctors (15%) reported.
Wall has decided to come forward with his story as Morgan Lewis and other major law firms, galvanized largely by the study’s results, are pledging publicly to help attorneys struggling with drinking, addiction and mental health problems.

A lifetime of drinking

Wall, 61, said his father had been an alcoholic who died of the disease at age 55.
There were signs early on that he, too, could become one.
“I was a budding alcoholic from high school, based on how much I drank and my behavior once I was drinking. I was the first person to make sure there was a reason for a party and the last one to shut it down,” Wall said.

Over the years, Wall said there were many times that he blacked out, having no memory of where he was or what he did.

One episode happened when he was 33 and married to his first wife, with whom he had three sons.
After a business lunch, he said, “I blacked out while driving home and it scared me.” That evening he was forced to skip one of his boys’ school events because he was still in no shape to go.
That led to his decision to largely give up drinking for several years.

He sporadically went to nightly meetings of a 12-step program. Looking back he realizes it didn’t do much for him because he wasn’t serious about recovery and didn’t seek expert help. Instead, Wall believes, he managed to stay away from alcohol out of sheer discipline, the same kind of discipline that led him to successfully represent large corporations on complex cases and ascend to the top of the so-called “Big Law” universe.

But his rigorous discipline was eventually outmatched by his cravings for alcohol.
Wall attributes his alcoholism to three factors: his heredity, his personality and how he handled the enormous stress of his job. He said he often felt the need “to turn off my brain and to release the intensity and the pressure of what we do.”

Wall was back to regular drinking by age 40. Initially, he only did so according to rules he laid down for himself: He’d never drink when driving, never when he was alone, never in the morning, never around family, never around colleagues.

“All those nevers were blown away over the next 12 years,” Wall said.
He tried again to quit drinking a few times in his late 40s and early 50s, but he never lasted longer than three months.

The bender to end all benders

Then came that bender in 2010. In the Washington office of Morgan Lewis, Wall hosted a dinner meeting where wine was served. He says he didn’t drink until everyone left and he was by himself in the conference room catching up on emails.
Despite vowing that he’d get a good night’s sleep ahead of the next day’s meeting in Houston, one glass of wine turned into several hours of drinking in the conference room, then passing out when he got back to his hotel.

The next morning, Wall grabbed several bottles of vodka from the hotel mini-bar to drink on the way to the airport. He also drank on the flight to Houston and again in the airport when he landed. By the time he got to his hotel he was so out of sorts that the staff, unbeknownst to him, called the paramedics.
He went to his room to take a shower. “Then there’s a hard knock on my door. In come the paramedics and a partner from the Houston office. They saw me completely inebriated and in no shape to conduct the meeting,” Wall said.

Later, on the phone with his wife and the firm chairman, he admitted he needed help. “But even then I ended up drinking the whole way home.”
He got back home to Philadelphia on a Friday night. That Sunday, in a diner, his wife and the chairman told him they’d had enough.

Wall hasn’t had a drink since. He entered a 30-day rehab program at Caron Treatment Centers three days later. After finishing that program, he stayed in touch with counselors for two more years and has stayed active in a local 12-step program for nine years.

It’s not clear why lawyers report a higher incidence of problem drinking than other professions, but there are some potential indicators.
“There are many risk factors that increase vulnerability for practicing lawyers: heavy workloads, long hours, chronic stress, a sense of isolation since they’re often working alone and in adversarial settings,” said attorney Patrick Krill, the lead author of the ABA/Hazelden study and now law firm adviser. 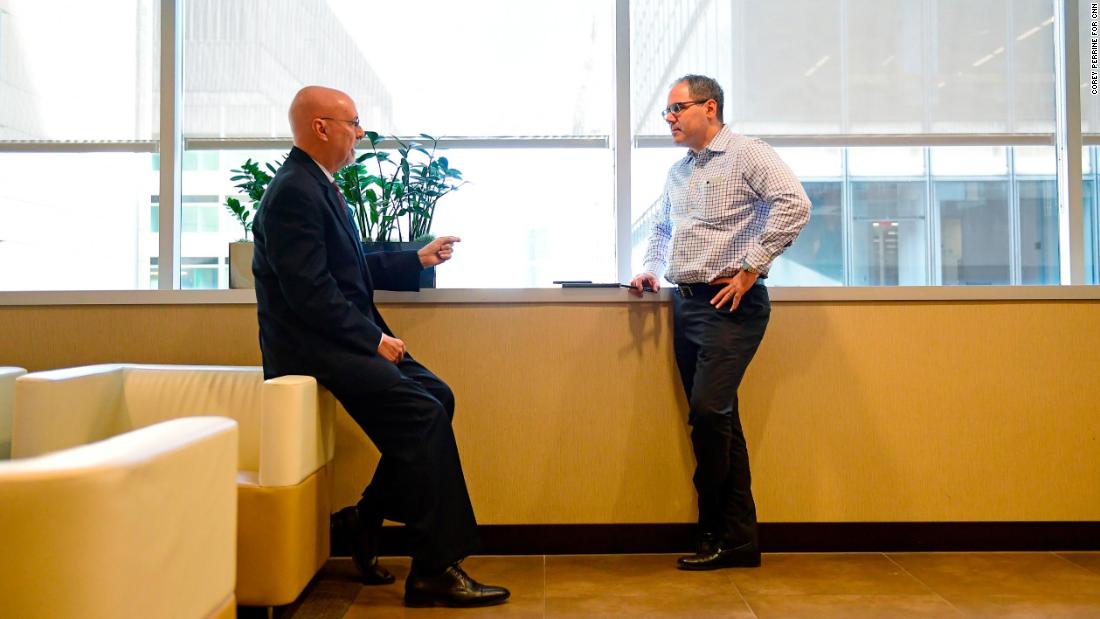 Wall, left, talks with fellow partner Louis Beardell at the Morgan Lewis offices in Philadelphia.What’s more, Krill added, “your default setting is a negative worldview and skepticism. It predisposes people to see everything through that lens. It makes optimism hard to achieve.”

The same pressures and outlook may make lawyers more vulnerable to depression and anxiety, too. In the same study, attorneys reported a higher incidence of those conditions than the broader population.
Drugs are a problem for many as well, according to Link Christin, who is the executive director of the legal professionals program at Caron Treatment Centers. He says he’s seen lawyers addicted to amphetamines, prescription pain killers and illegal drugs such as Adderall, OxyContin and heroin.
There is no indication whether the attraction to alcohol and drugs is tied to depression or anxiety, but often lawyers who seek treatment have “co-occurring” disorders, Christin said.

In the past few years, a number of highly successful lawyers have died by suicide or overdose.
One recent example was Gabe MacConaill, a partner at Sidley Austin who shot himself to death on a Sunday in the garage of his downtown Los Angeles office building in 2018, according to reports of his suicide.

In a stunning open letter titled “Big Law Killed my Husband,” his widow said she believes her husband had a mental health disorder that was exacerbated by the intense pressure of his job. One way he’d attempt to deal with it, she wrote, was to binge drink several times a year. He’d been working on a major bankruptcy case at the time of his death. MacConaill was just 42.
Two major factors have prevented a lot of lawyers from admitting they have a problem and getting help: Shame and professional risk.

Shame is what kept Wall from acting sooner. “I projected an image of a completely put-together, in control, confident lawyer,” he said.

Indeed, admitting to vulnerability and flaws doesn’t square with the assumption that lawyers must always be the confident, steady-hand problem solvers their clients expect.

And the professional risk if they’re found out or if their addiction directly affects their work is real, Christin noted. Making a mistake on a case could result in a client suing your firm for malpractice and reporting you to the disciplinary board of your bar association. Losing your job and losing your license to practice are also risks.

A Big Law pledge to help

Wall describes himself today as a recovering alcoholic.
He found the help he needed to stay sober at Caron, where he now serves as chairman of trustees.
His wife and daughters stood by him. And he remains managing partner at Morgan Lewis because he took his recovery seriously and the firm’s chairman in 2010 gave him a second chance.

As a leader in the legal profession, Wall wants to help reduce the stigma for others in his field who are afraid to ask for help.
And law firms are now realizing they must play a role in helping lawyers who are vulnerable to addiction and depression. 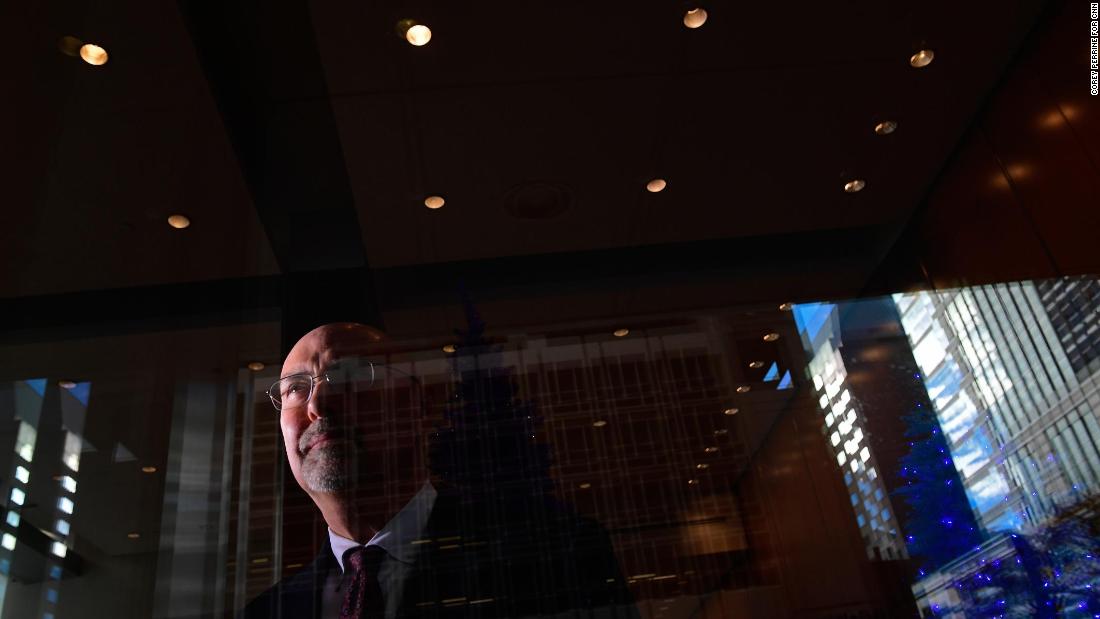 Wall says he hasn’t had a drink since 2010. In addition to his role at Morgan Lewis, he is now the chairman of trustees at Caron Treatment Centers.

To date, nearly 70 law firms have signed the ABA’s “well-being pledge,” which was launched in September 2018. The pledge calls on firms to create more supportive work cultures and make the prevention and treatment of substance abuse and mental health struggles a priority. That means, for example, encouraging self-care, offering non-alcoholic alternatives whenever drinks are served at work events, providing confidential access to help, and having written back-to-work policies for those who seek addiction treatment.

Morgan Lewis was one of the first firms to sign the pledge.
“Everyone I know — everyone anyone knows — has individuals in their families going through these things,” said Jami McKeon, the firm’s current chairman.

Even before the pledge, McKeon noted, Morgan Lewis was making well-being a more central focus of the organization’s culture. For example, she appointed a chief engagement officer and created more accommodating work policies to allow for remote work and generous post-leave arrangements.
Outreach to employees about the well-being pledge is especially critical since there are those who you’d never suspect need help and who aren’t likely to ask for it, McKeon said. “A lot of the people in the profession who do have a problem are high functioning.”

Having people like Wall in leadership is also a reassuring example that the firm will stand behind those who are struggling if they’re willing to get treatment.

“If someone doesn’t want to get help, then we’d have to part company because our clients are entrusting us with their most important matters,” McKeon said. “But if someone does want help, we’re going to get it for them.”

If you think you or a colleague may have a drinking problem, here’s a list of early warning signs that warrant seeking help. This ABA toolkit expands on steps employers and individuals can take to bolster attorney well-being.