Karen Franklin leans against the sink in the pink-tiled bathroom of her childhood home, counting out pills. There’s a purple morphine tablet for chronic back pain, a blue Xanax for anxiety and a white probiotic for her stomach, which aches from all the other pills.

In all, Franklin, 60, takes more than a dozen different prescription drugs, washing them down with tap water and puffing on a Marlboro while she waits for them to kick in.

“They take the edge off, but that’s about it,” Franklin says. So she keeps a bottle of vodka handy for added relief, increasing her risk of joining the legions of American women dying from prescription-drug overdoses.

Since the turn of this century, death rates have risen for whites in midlife, particularly women. In this series, The Washington Post is exploring this trend and the forces driving it.

Part 1: A close look at one tragedy in rural Oklahoma

Graphic: Why death rates for white women in rural America are spiking

Part 3: In a town where pills are currency, opioid addicts have few options

Part 4: The wait for an injection that could help curb heroin cravings seems to go on forever

Graphic: White women are dying faster all over America — but what about where you live?

While death rates are falling for blacks and Hispanics in middle age, whites are dying prematurely in growing numbers, particularly white women. One reason: a big increase in overdoses, primarily from opioids, but also from anti-anxiety drugs, which are often prescribed in tandem.

Between 1999 and 2014, the number of middle-aged white women dying annually from opiate overdoses shot up 400 percent, according to a Washington Post analysis of data from the Centers for Disease Control and Prevention. Anti-anxiety drugs known as benzodiazepines contributed to a growing share of the 54,000 deaths over that period, reaching a third in the last several years, The Post found, though spotty reporting in death records makes it likely that the combination is even more widespread.

Both drugs depress the central nervous system, temporarily easing pain and anxiety while suppressing respiration, heart rate and the gag reflex. Alcohol has the same effect, and combining any of these can be fatal.

“They act like a dimmer switch on the central nervous system,” said Rear Admiral Susan Blumenthal, former U.S. assistant surgeon general and an expert on women’s health issues. “When taken in combination, a person’s breathing and heart will slow down, and can ultimately stop. People can go to sleep and never wake up.”

Federal health officials have recognized the danger. This spring, in a guideline that urged doctors to reduce the general use of opioids for chronic pain, the CDC warned against prescribing them together with benzodiazepines, except for patients battling fatal diseases such as cancer. At the very least, the CDC urged doctors to warn patients of the risks, especially when the drugs are mixed with alcohol.

And on Thursday, the U.S. Food and Drug Administration began requiring warning labels on opioids and benzodiazepines — nearly 400 products in total — with information about the potentially fatal consequences of taking these medications at the same time. 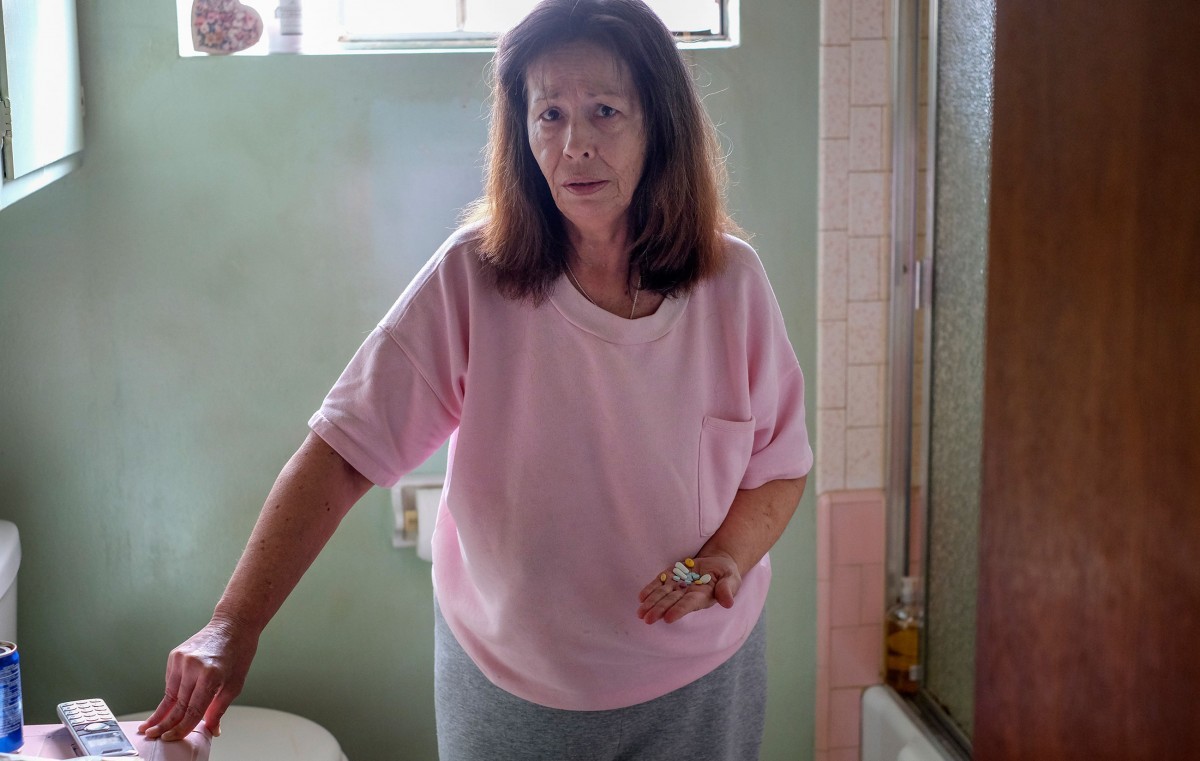 Karen Franklin, who has chronic back pain, shows some of the prescription medications she takes in an eight-hour period. Despite all these pills, she says her pain level is usually at 10.

“It is nothing short of a public health crisis when you see a substantial increase of avoidable overdose and death related to two widely used drug classes being taken together,” FDA Commissioner Robert Califf said in a statement. “We implore health care professionals to heed these new warnings and more carefully and thoroughly evaluate, on a patient-by-patient basis, whether the benefits of using opioids and benzodiazepines — or CNS depressants more generally — together outweigh these serious risks.”

Federal officials have no power to mandate a change in doctors’ prescribing habits. Even if they did, a mandate would do little for patients like Franklin who get their prescriptions from multiple physicians.

“An opioid might be prescribed by a pain specialist while a general practitioner or a psychologist may prescribe the benzodiazepine. They may not know about one another,” said Deborah Dowell, lead author of the CDC’s new opioid guidelines.

Franklin’s struggle began 17 years ago with a single prescription for Vicodin. At the time, she had her own home and managed a grocery store. But the side effects of long-term opioid use soon set in. Mounting anxiety. Sleeplessness. Depression. With each new problem, doctors sent her home with more pills.

Now she lives with her 88-year-old father and spends her days shuffling between the TV, a refrigerator stocked with chocolate Ensure and the bathroom, which relatives call her sanctuary. Armed with a Bible and a carton of Marlboros, she prays for God’s protection, cracking the bathroom window to let the cigarette smoke drift into the back yard.

Lately, Franklin has been blacking out. Her sister found her facedown in a plate of food, and she started using a walker after losing consciousness on her way to the mailbox.

“What is happening right now is a slow suicide,” said her friend Ellen Eggert, a supervisor for the Kern County Mental Health Department. But Franklin is resisting Eggert’s appeals to seek help for her addictions.

“I know it’s not good for me,” Franklin said. “But I would rather say my prayers and take my medication.”